As part of the retirement policy of the Board of Directors of Blue Star Limited, Ashok M Advani who will turn 75 on November 17, 2016 will retire from the Board after 47 years of meritorious service, and relinquish his position as Chairman of the Board with effect from November 30, 2016. He will be re-designated as Chairman Emeritus.

In a move that will ensure a smooth and quick transition, the Board of Directors, in its meeting held on November 10, 2016, unanimously decided to elevate Mr Suneel M Advani, Vice Chairman of the Board, to the position of Chairman with effect from December 1, 2016.

In April 2016, Blue Star had ensured seamless transition at the executive leadership level as well, with Vir S Advani and B Thiagarajan taking over as Managing Director and Joint Managing Director respectively, upon the retirement Satish Jamdar, MD. They have been working effectively as a team to drive an aggressive and prudent business strategy for the Company as it nears its platinum jubilee in 2018.

Blue Star intends to make significant and sustained investments in a number of areas including developing new technologies and products; increasing manufacturing capacity; enhancing the technical and managerial skills of its people; extending its distribution reach in India and abroad; building engineering and modern project execution capabilities; providing superior service and support to its customers; and building the Blue Star brand.

The well-planned leadership succession ensures that Blue Star will sustain its good performance and achieve its aggressive growth plans in the future.?

Suneel M Advani is a double graduate in Electrical Engineering and Economics from MIT, USA. He also holds an LLB degree from Mumbai University. 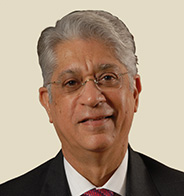 He spent his entire working career in Blue Star, joining as a Management Trainee in 1969 and moving up steadily to President and Vice Chairman in 1984. He retired from his executive position in 2014, and continued as Vice Chairman. Suneel established Blue Star’s presence in computer software development and export, and when this division was spun off to become Blue Star Infotech Ltd in 2000, he assumed the position of Chairman there and later, Managing Director as well, in addition to his responsibilities in Blue Star.

In the span of his career, Suneel formed many joint ventures with global majors such as HP, Motorola, Stork-Comprimo in the hi-tech area, and with smaller Indian entities in the air conditioning field. For Blue Star and Blue Star Infotech, he conceived and completed several corporate acquisitions. Over the years, he served on the managing councils of several industry and trade bodies, such as CII, and is the founder and a Past President of Refrigeration and Airconditioning Manufacturers’ Association (RAMA).

Back to Press Releases