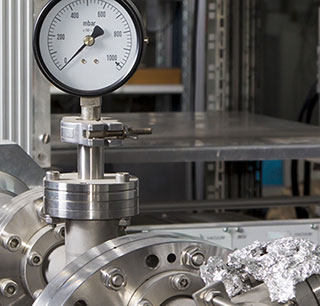 Blue Star is amongst the pioneers in introducing advanced technology and applications in the Indian market. As a philosophy, the company focuses on Digital Technology and Sustainability, with continuous investments and focused efforts in R&D. Today, with over 135 employees, backed by new-age infrastructure, the company prides itself on having one of the best R&D centres in the Indian HVAC industry, with its products competing with international players. Blue Star’s R&D function has a recognised status from the Department of Scientific & Industrial Research (DSIR), Government of India for the last four years, with re-certification as per new standards.

The R&D team at Blue Star is encouraged to keep abreast with latest techniques and processes, and is encouraged to participate in and network with technical workshops around the globe. There is an impetus for upgraded products with higher energy efficiency and eco-friendly refrigerants. The company partners with consultants who have valuable expertise and vast experience in specialised fields such as electronics and industrial design on a global level. Blue Star has long standing associations with leading global organisations that believe in constant innovation, including technical institutions of repute such as IIT Mumbai.

The R&D division has a metric structure, which is followed by most such centres of repute across the world. Research projects are undertaken on an ongoing basis to study and imbibe emerging technologies to prepare ground for future requisites. The main drivers of the projects that the company undertakes are advanced technologies, regulatory requirements, differentiation and creation of unique value propositions with an aim to increase market share and profitability. The R&D division caters to local and global businesses as well as designs products as an original design manufacturer (ODM) for several international brands.

Significant investment has been made in building performance and reliability labs as well as virtual modelling and virtual performance testing software, among others. The company’s chiller test labs are AHRI certified, along with an accreditation from NABL for room air conditioners and ducted systems. A separate department has been created with a focus on electronics, algorithms and embedded firmware. Software used by the R&D team comprises Pro-Engineer, Pro Mechanics, HTRI, Mechanical Desktop, Rhino, Alias, CATIA, IDEAS, Patran, Hypermesh, Femap, Ansys, Nastran, Fluent, Flow Mechanica and Moldflow.

Blue Star’s R&D has best-in-class infrastructure including performance test labs, reliability testing facilities, electronics lab, design studio, and high-end workstations for CAD and analysis, amongst others. Today, with many patents to its credit including the four won during FY20, the Company prides itself on having one of the best R&D centres in the Indian HVAC industry.The company has six registered designs and has applied for 30 patents.

Blue Star’s R&D team is proficient in developing products at par with global standards and has developed advanced products such as the VRF IV Plus system, high-efficiency chillers, wall-mounted units and refrigeration products that use next-gen refrigerants. Refrigerants with lower global warming potential are being studied in detail with the intention to be adopted in select products. Projects are undertaken to augment R&D competency across all product lines.

Blue Star’s technical capabilities are recognised by policy making departments of the Government of India, and the company plays a vital role in developing standards for energy efficiency and safety, representing the industry across national and international forums.

R&D is an integral part of the products business for Blue Star, and the company will continue to systematically invest towards developing capital equipment and human resources in this important domain.