Reach for the Stars - The Story of Blue Star Limited 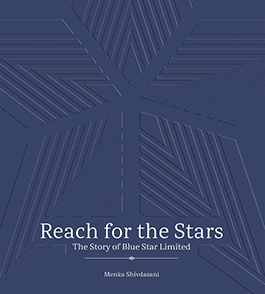 When Mohan T Advani began Blue Star in the middle of World War II with nothing more than a two-member team and Rs 2,000 in the bank, he dreamed of creating something for posterity. Now, 75 years later, and under three generations of leaders who have been inspired by his vision, the organisation has grown to be a market leader in cooling and preserving the three essentials that directly impact the quality of life – air, food and water.

Best known for its cooling solutions, this Rs 5,000 crores Company with five state-of-the-art manufacturing facilities has expanded into related diversifications, with products and systems for water and air purification. Its large-scale installations have gone beyond air conditioning; through its comprehensive Mechanical, Engineering, Fire-fighting and Plumbing solutions, Blue Star breathes life into structures as varied as airports and metro rail networks; hospitals and defence installations; malls and retail outlets. A vast and growing dealer network has also taken
Blue Star products into millions of homes in India and overseas.

Through the turbulence of more than seven decades, some fundamentals remain the same – an ethical approach to business; a sharp eye for new technologies to enhance the Company’s products and processes; the ability to stay firm on strong foundations, and yet remain nimble enough to reinvent itself whenever necessary; and an abiding and well-founded faith in the men and women who have made Blue Star what is it is today.

With 2,800 employees at last count, and a branch and dealer network that spans the globe, Blue Star is a recognised market leader, but there is no room for complacency. Seventy-five years is a long time, but for a vision as vast as the one that the Founder set in place, it is not enough; now, the centenary beckons!

As MTA said: “A man’s lifework must make a contribution that reaches for the stars – beyond himself and far into the future”. In this, he truly succeeded, and as
Blue Star celebrates its Platinum Jubilee, the future has only just begun.