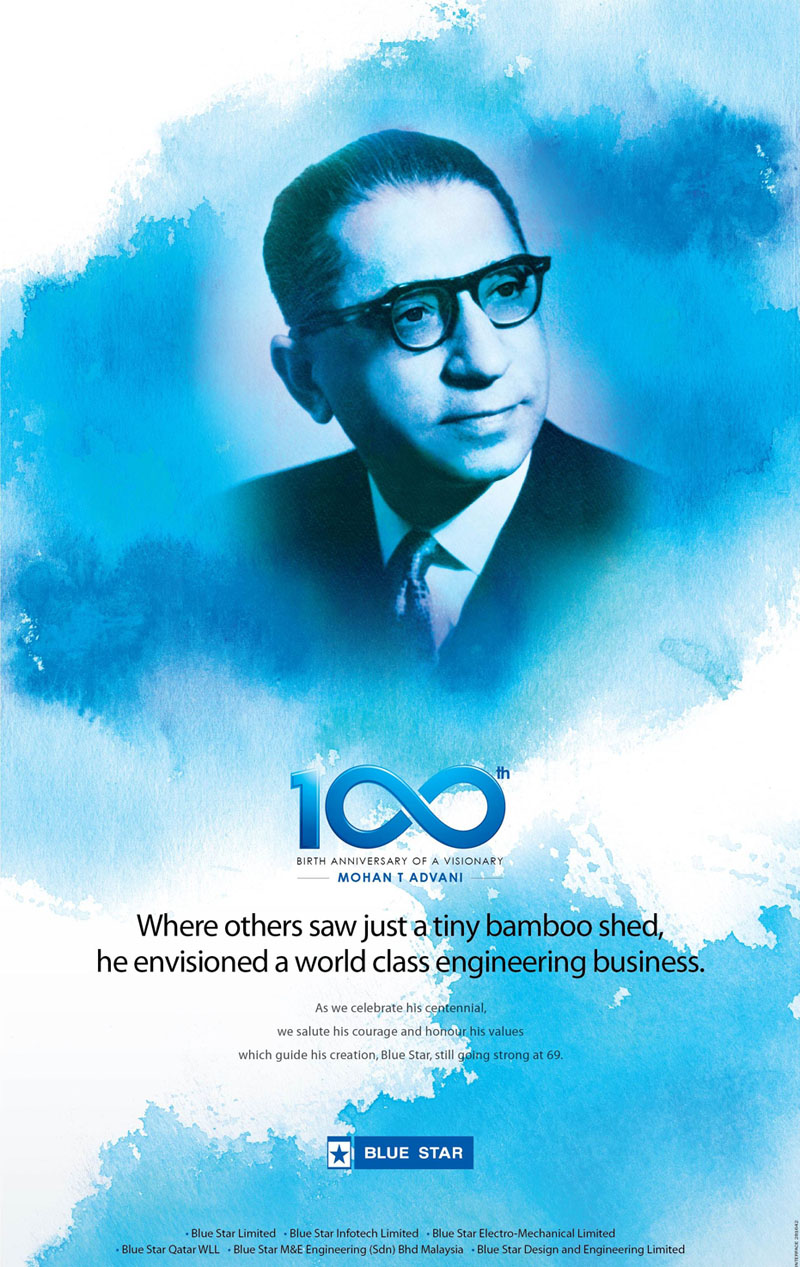 In September 1943, with just two employees and two thousand rupees, Mr. Advani started Blue Star Engineering Company. At the time, he was thirty years old, and World War II was well underway. It could only be his confidence and ambition that carried him through. Seeing opportunity where others saw difficulty, he built a company that was progressive and flexible.

Blue Star Engineering Company, under the hand of Mr. Advani, pioneered the manufacture of water coolers in India. With his flair for marketing and his innate understanding of the Indian customer, the Blue Star Engineering Company evolved into a manufacturing company. But this wasn’t enough for the innovative, ambitious founder. In 1946, he emptied the company’s bank account to visit the USA in order to negotiate partnerships and tie-ups. In the years to come, the several lucrative agencies that he negotiated for Blue Star brought the Company invaluable know-how and helped it burgeon.

Although Mr. Advani’s health had already started to decline in the early 1970s, he took a keen personal interest when Blue Star was commissioned to be installed in the new skyscrapers that began to dot Bombay's skyline in that era. Had he been here today, he would have been happy and proud of the position that Blue Star Engineering Company has attained. The seed planted by him has grown into a mighty oak, and is growing still.

A large-hearted man who loved life with a passion, Mohan Advani was a natural leader, inspiring great devotion in his staff and instilling a progressive work culture. His personal business ethic was imbued with professionalism, a commitment to quality and customer satisfaction, a sense of corporate social responsibility and consideration for employees - long before these became fashionable buzzwords. Decades after Mohan Advani, his legacy continues to grow from strength to strength.

A pictorial tribute titled 'Remembering Mohan T Advani: The Man and his Legacy', was published on the significant occasion of his birth centenary on November 11, 2012. This memoir commemorates his life and legacy, and incorporates interesting inputs and anecdotes from numerous people whose lives he touched.

To view e-version of this Memoir, please click here.